C is for Congenital, which means something you are born with. All people diagnosed with CLOVES had some symptoms at birth or in utero.

L is for Lipomatous, which means fatty or having to do with fat. Typically most CLOVES patients have a soft fatty mass at birth, often visible on one or both sides of the back and abdomen.

O is for Overgrowth, which means people with CLOVES may grow some areas of their bodies, at a much faster rate than others.

E is for Epidermal Nevus, which is a skin lesion that can be flat, tan, or slightly raised.

S is for Spinal/Skeletal Anomalies or Scoliosis. Some people with CLOVES have tethered spinal cord, vascular malformations in/around their spines and other spinal differences. High flow, aggressive spinal lesions (like AVM) can cause serious neurological deficits/paralysis.

There are a variety of signs and symptoms not covered in the CLOVES acronym. These include: overgrowth of extremities (usually located on the arms or legs), large wide hands or feet, large fingers or toes, wide space between the toes and fingers and asymmetry of body parts. Other skin anomalies include lymphatic vesicles (look like blisters) and other birthmarks. Some people with CLOVES have different orthopedic challenges related to knees or hips. Some people with CLOVES have different sizes or absence of a kidney.

CLOVES is caused by a somatic genetic mutation in a gene called PIK3CA that increases the activity of the gene. CLOVES belongs to a category of diseases known as PIK3CA-related overgrowth spectrum or PROS.

CLOVES syndrome is rare and very variable; ranging from mild to severe. The common features in most patients allow for proper diagnosis and distinction from other syndromes. The most consistent features of the syndrome are:

Most people with CLOVES syndrome do not have all these signs, but rather a combination of abnormalities; though some can be subtle or deeply seated and requires a dedicated physical exam and proper imaging studies.

The diagnosis can be established right after birth, though prenatal diagnosis with modern imaging tools may be feasible [3].

Historically CLOVES Syndrome diagnosis has been made by medical exam, observed physical characteristics and clinical information/history. With the discovery of genetic mutation in CLOVES and PROS conditions, tissue testing for PIK3CA can be performed. The diagnosis can be established right after birth, though prenatal diagnosis with modern imaging tools may be feasible.

The management of CLOVES syndrome can be very challenging and requires an interdisciplinary team of physicians with experience in overgrowth and vascular anomalies.

PIK3CA-related overgrowth spectrum (PROS) is an umbrella term for rare syndromes characterized by malformations and tissue overgrowth caused by somatic mutations in the PIK3CA gene. In PROS conditions, malformations are seen in several different tissues such as skin, vasculature, bones, fat and brain tissue depending on the specific disease.

Some people with a PIK3CA mutation fall clearly into one of the diagnoses below, whereas others have symptoms of several different PROS syndromes. Additionally some clinicians diagnose patients with PROS, the umbrella term, instead of one of the syndromes under the PIK3CA umbrella. This can be confusing to providers as well as patients and families.

Additionally PIK3CA mutations have been found in Klippel-Trenaunay Syndrome as well as Lymphatic Malformation. 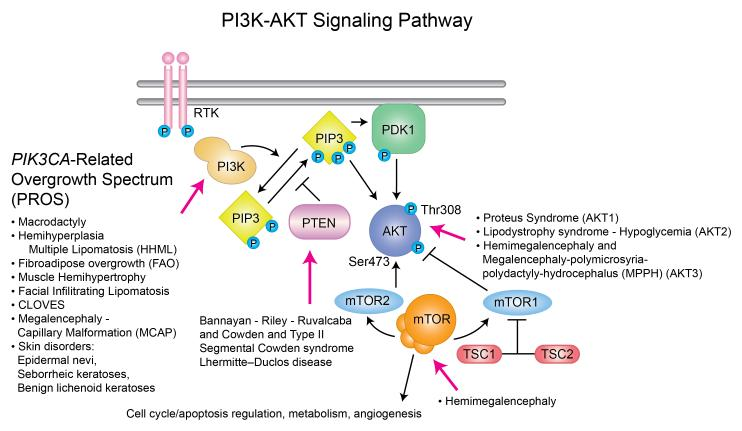 Some people with a PIK3CA mutation fall clearly into one of the diagnoses above, whereas others have symptoms of several different PROS syndromes.  Additionally some clinicians diagnose patients with PROS, the umbrella term, instead of one of the syndromes under the PIK3CA umbrella.  This can be confusing to providers as well as patients and families.

Patient Advocacy Organizations for other PROS Disorders are below:

Your contribution will help our organization be strong and sustainable for many years to come.

“Never doubt that a small group of thoughtful, committed citizens can change the world; indeed, it’s the only thing that ever has.”
– Margaret Mead